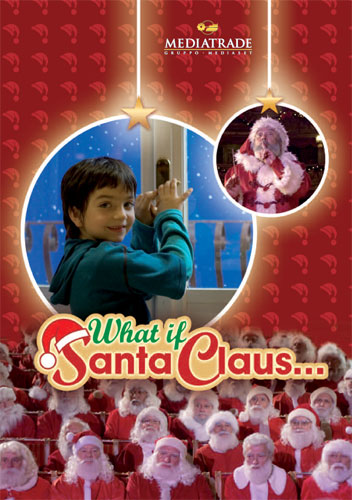 WHAT IF SANTA CLAUS

Achille Malerba is a successful businessman, who wants for nothing: a thriving business, a beautiful wife, a luxurious home and a string of young and available mistresses. But Achille is also dishonest, selfish, arrogant, a liar and thus lacking scruples, even managing to land Santa Claus in trouble! Ezechiele has been one of the mainstays of the Santa Klaus firm for the last 400 years, a company which for centuries not only sees to delivering presents to children, but also oversees the good nature of all human beings; now he risks being demoted and sent to build toys in Lapland because the level of goodness in his area has fallen to embarrassing levels, all Achille’s fault. Ezechiele has until midnight on Christmas Eve to make Achille into a good person and save his job. One evening, while Achille is returning home after another of his escapades, Ezechiele runs him off the road and wrings a promise out of him that he will be good. But it comes to nothing, and Ezechiele decides to resort to extreme measures: within 24 hours, Achille see his world fall to pieces; his company is declared bankrupt, his wife leaves him for his best friend and even his house is confiscated. Starving and reduced to sleeping under bridges, abandoned by his false friends and the banks, Achille find unexpected help in the form of Donatella, a cleaner he had sacked because she refused the pass he made at her.
Donatella has a generous nature, but is downtrodden by the brutalities of life, and, despite being warned off by her best friend Milena, she starts to believe that behind Achille’s arrogant and self-important mask hides a kind-hearted man. Even little Lorenzo, Donatella’s son, gradually grows fond of Achille and starts to see him as a new father figure. Nor has Ezechiele abandoned him, following him step by step in his search for work and the discovery of a new world which Achille has never even known about. Achille discovers that he is changed for the better and happy, but a last test awaits him, a test which will determine his and Ezechiele’s fate: will the new Achille be able to resist the possibility of making everything return as it was?