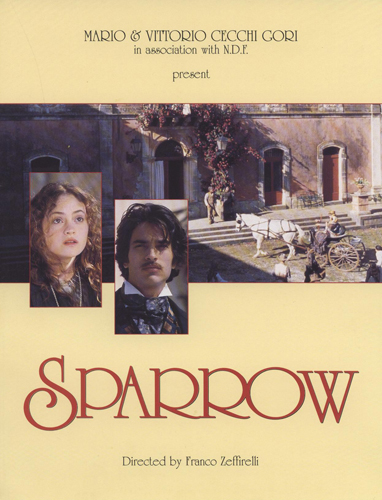 1854. The Sicilian city of Catania, plagued by cholera, is evacuating its citizens. The beautiful nineteen year old Maria, who has been reluctantly locked up in a convent for the last twelve years by her manipulative and wealthy stepmother, Mathilde, is set free. For Mathilde, it is a major upset to her scheme for her stepdaughter to become a nun and so be ruled out of her will. For Maria, it is the beginning of a liberating journey of the senses.
Maria's father, Giuseppe, collects her from the convent and takes her to Mathilde's grand villa overlooking Mount Etna where she is given a cool reception by her step-brother and step-sister. Unperturbed, she revels in her newfound freedom and embraces the surrounding countryside where she encounters the spirited and ¬handsome Nino, a close friend of the family, who is instantly captivated by her.
This event is an emotional turning point for Maria. The sudden awareness of her innate sensuality and overwhelming desire for Nino also terrifies her as she is burdened with an equally overpowering feeing of guilt. At a picnic with the Valentini family on the sIopes of Mt. Etna, Maria and Nino are intoxicated with each other's presence. This does not go unnoticed by Mathilde, and although the two spend an enchanted summer in each other's company MathiIde soon sees to it that their intimacy is shortlived.
Summer fades to autumn and eventually Catania is declared a safe city to inhabit again. For Maria, this means a return to the convent, to renounce her love for Nino and give herself up to God. When the time comes to say farewell to the Valentini's and the Mathilde's family, he is noticeably absent.
Back in the convent, Maria's health and will to live decline as it gets closer to the day of her consecration when her fate will be irrevocably sealed forever. Meanwhile, Mathilde has arranged a marriage between Nino and her daughter, Giuditta. On their wedding day Maria steals from the convent and attends the ceremony in a dishevelled robe.
Maria drives herself into a physical and mental frenzy. She is unable to forget Nino and the only solace she finds is in a nun called Agata, who, in a permanent state of delirium, has long been confined to a solitary cell. There is something in her demeanour that Mathilde understands, for Agata too once found true love and has never forgotten.
In one last crazed bid for freedom, Maria escape to Nino's, where she confesses her fears of becoming like sister Agata and, all too late, her eternal love for him. Once calmed, Nino escorts her back to the convent gate. He kisses Maria gently on the lips and leaves her, with heavy heart, in the hands of destiny.