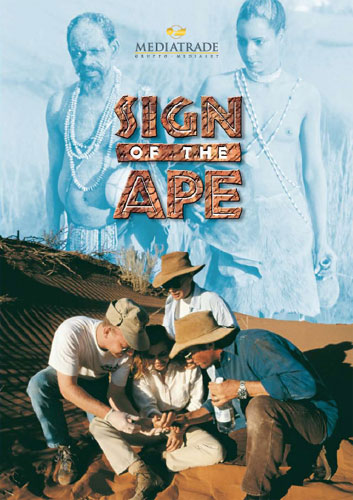 In an English zoo, palaeontologist Mark lascou, with the help of his son Paul, discovers an incredible message on the inside of the thigh of a small elephant from Africa. The message was written by professor Robert Moyo, who mysteriously disappeared in the Kalahari Desert two years earlier, while he was seeking the famous missing link between monkey and man. Though the fact that Mark is a workaholic has already caused problems with his wife Anna and brought them to the verge of separation, he decides to leave for South Africa with his son and continue Moyo’s research. In South Africa he contacts two colleagues of Moyo’s, professor Henry Simak and his assistant David Arkan, who instead of helping him do everything in their power to place obstacles in his path. Thanks to Moyo’s widow, Kada, Mark organizes an expedition into the Kalahari, and is joined by Anna who has come to take Paul back to London. Simak and his men follow the expedition and try to kill Mark and the women. Having shaken off their pursuers Mark and his group find refuge near the cave that Moyo referred to in his message. Here Mark finally finds what Moyo had discovered: a group of hominids whose development had arrested thousands of years ago. The unexpected arrival of Simak and his gang endangers not only the incredible discovery, but also the lives of Mark and his group.