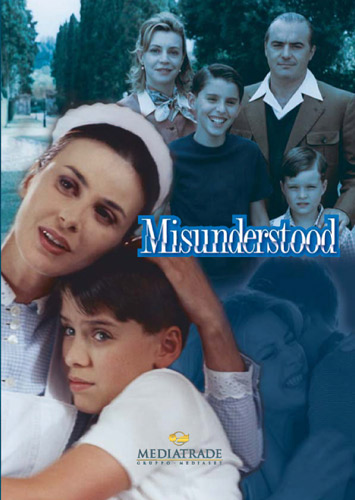 Inspired by a famous novel by Florence Montgomery and translated into many languages, Misunderstood is the dramatic, moving story of the relationship between father and son, who love each other but are unable to communicate
or understand one another. The boy, Francesco, is ten. His father is a workaholic, but he has an affectionate mother who is extremely close to her two boys. Francesco adores his mom and his world is destroyed when he finds out that she is suffering from an incurable disease. He starts to argue with his father who, although intelligent, is too busy to really get through to his son. Their relationship is certainly not improved by Francesco trying to run away from home, and they are always at odds with each other because Francesco is inevitably blamed for his younger brother Mino’s mischief.
He suffers terribly when his mother dies, and his father asks her sister to move into their house to help him look after the boys. Francesco finds life more and more difficult now that the no longer has his mother to comfort him, but one very special day spent with his father fills him with happiness and brings them closer. Then one evening, Francesco sees his little brother venturing out onto the diving board over the pool, and realizes he is about to fall in. He saves him in the nick of time by shielding him with his body, but suffers a fatal spinal injury. At his dying son’s bedside, Francesco’s father discovers just how much his boy loved and admired him.