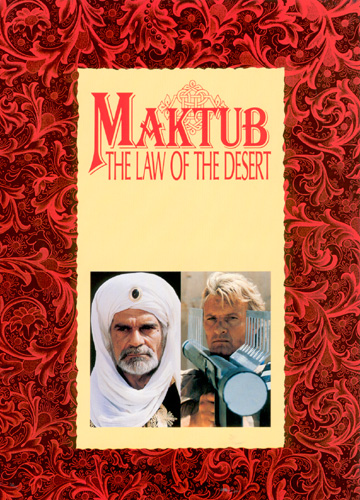 Maktub -The law of the desert

Cristine Sanders, a rich and beautiful American , has been separated from her husband Moulay Ben Zair for ten years and has custody of their twelve year old son Robert. The couple has remained good friends and Moulay frequently sees the boy. But then for no apparent reason, he kidnaps Robert from school and disappears to Marocco.
Cristine is worried and scared as there seems to be no clear motive for this cruel act. She is left only with a curious warning in Arabic, found in her room, saying “ MAKTUB – IT IS DESTINY”.
Cristine and her Uncle William own Sanders Corporation, a leading Wall Street firm. Together with the company lawyer and a family friend, Red Murchinson, they bring pressure on powerful connections in both political and diplomatic circles to search for Robert. But there is no trace of the boy.
Now Cristine becomes desparate and decides to enlist Tom Burton, a CIA linked mercenary and specialist in Arab Matters. He discovers that Robert has been taken to Magruf, Emir of the Ben Zair tribe. The venerable leader has decreed that according to ancient tradition, Robert , as his grandson, will be his heir, and must therefore learn his duties as a Ben Zair prince. Anyone who interferes with the boy’s destiny will suffer the consequences.
At first Robert is excited by the wondrous new changes in his life. But when he discovers that he will never see his mother again, he is determined to escape.
Cristine is attracted to the cold killer who is the only man who can save her son and insists on being part of his commando force. Tom knows where Robert has been hidden but he is guarded by the Ben Zair warriors who have never been defeated.
It is a dangerous mission because someone, who knows Tom’s every move, has been informing Magruf of his strategy. It is only through the help of Moulay that Tom reaches Robert alive. Moulay sacrifices his own life to save his son and the commando group manage to escape into the desert.