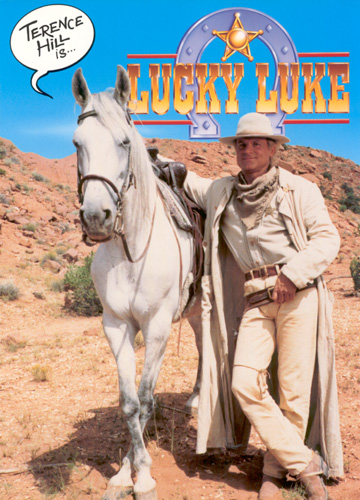 Lucky Luke, our lone cowboy, is the fastest gun in the West, even faster than his own shadow. He is the sheriff of Daisy Town, a merry and unruly frontier settlement where the law of the strongest and the loudest laugh holds sway. Jolly Jumper is not only Lucky’s trusty horse, but also the brains of Daisy Town. A thinker and philosopher, he is always one jump ahead of everyone else. As a change from the tedious routine as Lucky’s deputy, he frequently indulges in very human behavior: cracking jokes, drinking heavily, dancing with loose women, telling tall tales rowdily, dancing with as the meanest six-shooter in the West. But not everything is roses and honey in Daisy Town.
A terrible shadow looms over the two-horse town – the four Dalton Brothers, a fearsome quartet of descending stature: from Averill, the tallest and dumbest, to Joe, the shortest and meanest.
The Daltons are the sworn enemies of Lucky Luke who is constantly trying to thwart their devilish plans and their spectacularly clumsy escapes from the Daisy Town Jail. But female touch is provided by the irresistible saloon barmaid, Lotta Legs, the most beautiful undiscovered treasure of the West. Hopelessly in love with her wayward Lucky, she’s continually frustrated by the total lack of romanticism in her laconic and distracted hero. This fractious band finds itself caught up in a series of misadventures, crossing paths with hordes of wacky friends and fiendish enemies: the hysterical nut-case, Billy the Kid, the spaced-out Tenderfoot Waldo and the ferocious Ma Dalton among others.