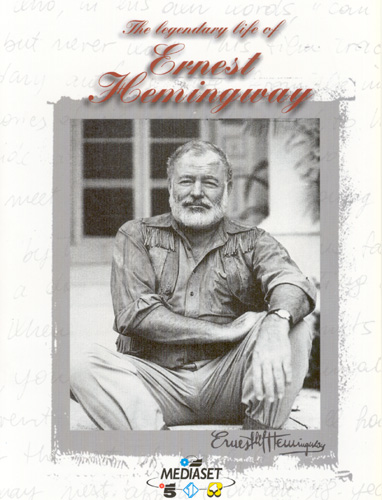 Legendary life of Ernest Hemingway, The

Ernest Hemingway, a man who in his own words, “can be destroyed but never won”. This film traces the legendary author’s life, from the images and memories of his early boyhood , to his tragic suicide at the age of sixty-two.
We first meet Hemingway as a young boy dominated by the virile figure of his father, Clarence, a doctor devoted to hunting and fishing.
Hemingway next appears as an 18 year old ambulance driver during the World War I who is wounded on the front of Piave.
In the hospital, he meets and falls in love with a young Red Cross nurse who will later become the model for his heroine in “ A Farewell to Arms”, a fictionalizes account of his experience as a young soldier coming to grips with the horrors of war. Hemingway becomes a foreign correspondent and travels to France, Italy and Spain. But soon abandons his journalistic career and settles in Paris to write novels and short stories. Interspersed throughout the story are Hemingway’s encounters with an enigmatic woman of indeterminate age who becomes his closest confidant. She is the personification of death’s shadow and follows him throughout his life. In the end, she finds him in a clinic as an old and disillusioned man, wasted by anxiety and depression. Shortly after, Ernest Hemingway takes his life with a shotgun.