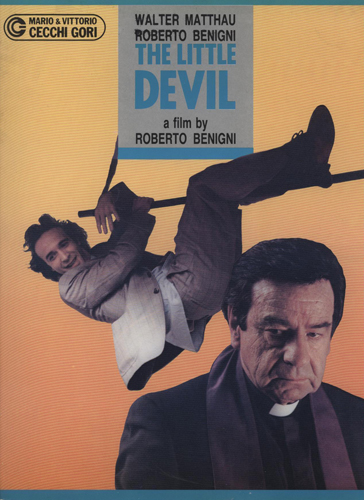 Maurice, a priest a the American Theological Centre of Rome, professionally burnt out and on the verge of a nervous breakdown, has just confessed his weakness for a beautiful parishioner named Patrizia.
While leaving the confessional booth, he receives an urgent summons to the sacristy, where a woman possessed of the devil is raving out of control and shrieking incomprehensible phrases in a man’s voice. Maurice quickly performs the ancient Rite of Exorcism, and the woman, demon expelled, falls happily into the arms of her family waiting tearfully in the hall outside. But the exorcised demon, naked and trembling like a skinny dipping school boy, in still hanging around, hiding behind an enormous antique closet.
When Maurice flushes him out, the little devil says he was bored with Hell, and that he ran away to seek fun and excitement as a tourist in the human world. Incredibly, and against his better judgement, Maurice lets the little devil stay, but only “temporarily”, until he can think of a way to get rid of him without the other priests finding out. Instead, the priest and the little devil became friends, an odd couple so odd, that Maurice’s tragic-comic attempts to keep the little devil out of sight precipitate a hilarious scandal that nearly wrecks the religious institution, and deals a final blow to Maurice’s already shaky mental health.
When Patrizia comes to visit and finds him ill and showing signs of madness, she is convinced that Maurice is losing his mind over her, and leaves town to visit her mother in Taormina. By sheer chance, the little devil, having wondered off, finds himself on the same train.
Though he and Patrizia never meet, he too gets off in Taormina where, almost immediately, and at first sight, he falls madly in love with a beautiful sexy girl named Nina.
The little devil knows nothing about love or sex, nor has ever seen a naked woman. Nina, a gambling addict killing time until the gambling casino opens, is an expert and willing teacher; and, before long, the little devil has forgotten all about Maurice, his priest friend back in Rome.
That very evening however, Maurice, desperate to explain his bizarre behaviour to Patrizia, and convince her not to leave him, arrives unannounced in Taormina. When he and Patrizia finally meet, and he tries to tell her about the devil who has become part of his life, she runs away and leaves him standing in the street, more convinced than ever that he is mad. In that moment of darkest despair, Maurice sees the little devil, crazy with love for Nina, dancing the tango under the soft glow of the Japanese lanterns on the Casino dance floor. When, later, Maurice discovers, terrified, that Nina’s image isn’t reflected in the dance floor mirrors, that her image doesn’t appear on the nightclub photographer’s souvenir Polaroid snapshot, he realizes Nina, too, is a devil, and tries to warn the little devil.
It is already too late – the little devil and Nina are locked in their hotel room enjoying an unforgettable night of passionate earthly love. By now the truth is know: Nina’s mission in to capture the little devil and take him back to the Hell.
The Next morning a worried Maurice sees the little devil come out of the hotel room alone. When, sadly, they say their goodbyes, we hear Nina’s voice inside the little devil, nagging him to hurry.
Having experienced what every tourist dreams of experiencing on vacation, the little devil is not unhappy to leave. As for Maurice, standing there alone, a melancholy smile on his face – he’s more than happy to settle for a little peace and quiet.