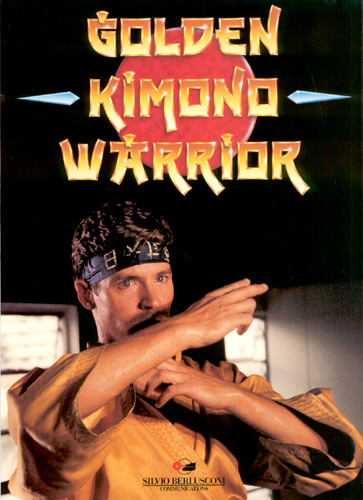 Larry Jones (Ron Williams) is the Golden Kimono Warrior. Set amidst exotic surroundings and karate battles, every challenge, every duel is a confrontation, a chance to measure one’s self.
Karate is a physically exhausting but also mentally draining martial art, in which every winning move is the result of many hours of tenacious training either in the ring or on the beaches of Miami.
The most important factor is to participate but above all to win.
The trials and tribulations, the loves, the disappointments, the jealousies of a group of young university students who have one common denominator – their passion for Karate. They hope that through this martial art they will be capable of discovering hidden skills, granted to those who practice the art seriously.
From the atmosphere of the Deco’ district during the 30’s to the infinite beaches of Fort Lauderdale, to the skyscrapers of downtown Miami, the Sun Capital: this is the paradise-like setting of a wonderful television series.
Friendship, the family, loyalty, competition, the eternal struggle between good and evil are all elements which make this new series of THE GOLDEN KIMONO WARRIOR an outstanding production.