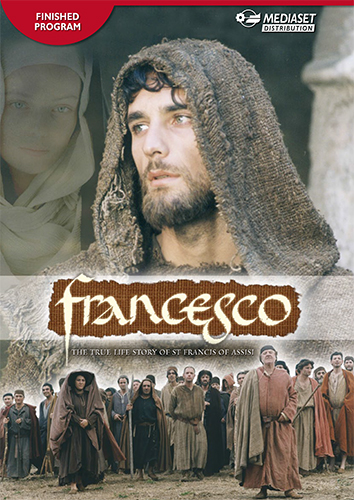 This is the true story of the life of St.Francis of Assisi, founder of the monastic order that bears his name.
It begins when Francis is still the young heir of a wealthy noble family, and takes up arms to participate in
the fighting between the richest houses in the city. He is captured by the enemy and put in prison, which makes him reflect on his vocation in life. Soon afterwards he listens to and
follows his inner voice, which urges him to abandon his riches and dedicate his life to preaching the Gospel and to caring for and protecting the needy and afflicted. During years of preaching and charitable works, Francis gathers other people around him, persuading them to follow his choice of renouncing worldly goods and of devotion and prayer, and founding a monastic order to care for the poor.
He is loved and mourned by everyone when he dies, especially Clare, a childhood friend who followed him and made the same religious choices, to the extent that
she also was canonized by the Catholic Church.