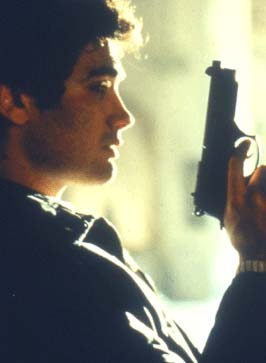 Investigating several cases of ritual murders in Rimini, young homicide inspector Matteo Colonna realizes that he is being shadowed. Cornered, the man who has been following Colonna claims to be Colonna’s long-lost father, Zanetti. A video from Colonna’s childhood convinces his that Zanetti is indeed his father. After more young women are brutally murdered, the serial killer is finally apprehended. However, it emerges that the deranged man is only carrying out the orders of a fiendish mastermind. Suspicious of Zanetti, Colonna’s colleague Roberto discovers a striking similarity between Zanetti and the prime suspect of another unsolved murder case. Just before Roberto can warn his colleague, he is murdered. Lured into a trap by his “father”, Colonna learns the shocking truth: Zanetti is actually the man who killed Colonna’s father years ago. Now he has been ordering the deaths of those who lock their parents away in shabby old-age homes, those who sin against the Fourth Commandment: “You shall love and honour your parents”…