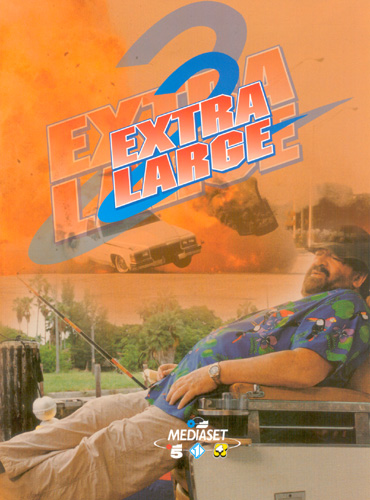 Extra Large 2 is the second adventure series with the well known TV character, Jack Costello the friendly investigator (Bud Spencer) who uses both his physical strength and cunning intelligence to combat the “bad guys”.
The series is made up of 6 self-contained TV movies. In each episode Jack Costello and his partner are faced with a new and exciting case: at one stage our hero becomes involved in an international plot to kill a Chinese scientist in order to prevent him from revealing his new discoveries; another time he must find the murderer of his Indian friend; in another case he is forced to put a stop to a series of homicides carried out by a mysterious Ninja warrior. Costello’s cases are credible and serious, and excellent performance of Michael Winslow (the vocal artist from the film “Police Academy”) as Joe’s partner adds a very comical and enjoyable touch to the production. The stories of EXTRALARGE 2 all take place in the U.S., shot entirely in Miami. Each episode is shot on 35mm film and is shot individually as a separate film. The crew is American, apart from Alessandra Capone as Director and R. Girometti as the Director of Photography.