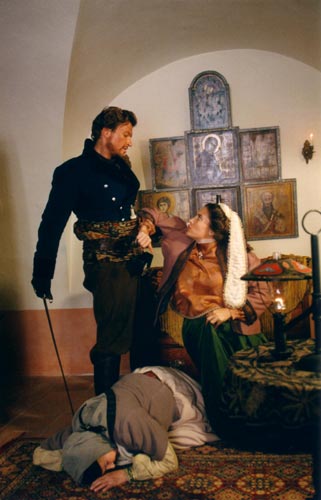 The death of his wife Olga caused by the perfidious traitor Ivan Ogareff, throws the courageous Tsar’s Capitan Michele Strogoff into depression. The Tsar personally recalls him to his duty and entrusts him with the task of saving the extremely young heir to the throne of all Russia, Boris, who risks being taken prisoner by the head of the Tartars, Feofar Khan, who from far-off Siberia is leading a revolt against the Tsar. Strogoff departs incognito for Siberia and on the train meets the agreeable French journalist Jules Vermont. In the meantime, young Boris has found temporary protection in the home of Count Krasov and his daughter, the beautiful and kind Nadia, and from here the young boy is led to safety within an orthodox monastery just before Krasov’s home Is attacked by the Tartars. The perfidious Ogareff, having passed to the side of the Tartars, takes Count Krasov hostage and forces his daughter Nadia to take the same train which is taking Strogoff to Siberia in order to betray him and hand him over to the Tartars. The train is attacked but Strogoff manages to save himself and reach young Boris at the monastery. Nadia, however, is once again captured by Ogareff but manages to escape from his desires thanks to the intervention of Sangarre, a beautiful gypsy, Ogareff’s mistress and victim. Strogoff and young Boris, in the meantime, disguised as simple peasants, end up in the camp of the ferocious Feofar Khan.
While Strogoff takes young Boris back the monastery, Nadia goes to Feofar Khan in order to attempt to free her father. Here she finds the unexpected help of Sangarre who wants to keep her as far away as possible from Ogareff. Taking advantage of a secret passage, Nadia and her father escape from the prison, but their freedom is short-lived. Count Krasov is killed by the Tartars and Strogoff is taken prisoner, but his resistance permits Nadia to flee. The Tsar’s messenger is received nobly by Feofar Khan who proposes to him that he betray his king, but Strogoff refuses and Feofar condemns him to torture. Nadia returns to Feofar’s camp in order to save Michele but is taken prisoner herself. Shut up in the same cell, the two declare their mutual love for one another. At dawn, the torture takes place and Strogoff is blinded by the executioner using a white-hot blade. Nadia takes the man she loves by the hand and the two leave the camp in order to reach Boris at the monastery, but first they take shelter in a shack where they spend the night together. Unfortunately, Ogareff has followed them in hiding and arrives before them at the monastery. When Nadia and Strogoff arrive they find all the nuns dead and Boris in the hands of Ogareff; the latter, cowardly, challenges the blind Strogoff to a duel, but during the fight Michele regains his sight. In that precise moment, the Tsar’s cavalry arrives, Ogareff is killed while Strogoff, Nadia and young Boris, finally free, reach Saint Petersburg where the Tsar in person blesses the forthcoming marriage of Nadia and Strogoff, who is appointed head of the imperial guards.