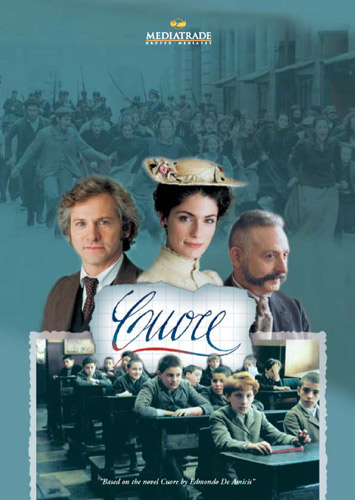 Cuore (Heart) is the title of a famous children’s book published in Italy at the end of the nineteenth century, which was translated into many languages and distributed throughout the world. The novel tells of a boy at elementary school, Enrico Bottini, who comes from a middle-class family in Turin, and who comments on the school year in his notebook, giving his impressions and describing his experiences and the various events that take place. Published at a time when Italy was taking its first steps as a unified nation, the book was an attempt to describe a country united by sentiments and values. The protagonists of the many episodes in this series, symbolize values that apply to all humanity, such as the importance of work and sacrifice, brotherhood, honesty.
The story develops not only through the events that affect the whole of Enrico’s class, by focusing on the lives of some of his fellow students and on the love that blossoms between two teachers, but also through the stories told to the pupils by the male teacher, which are self-contained episodes. Each one serves to teach children the importance of values that are not confined to an era or to individual nations, and still hold good today.