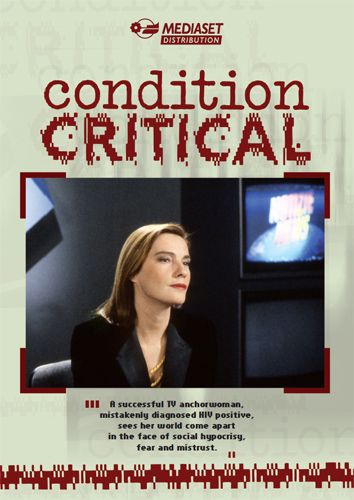 Giulia is a celebrated TV anchorwoman, married, has a 7 year old son and is 5 months pregnant. All of this dissolves in an instant when she discovers that her best friend an ex-lover, Ernesto, is dying of AIDS and she has to undergo the dreaded blood test. The result is devastating: HIV positive with the risk that the child she is carrying is infected as well
Her husband Luca, a frustrated intellectual, is unprepared to cope with the tragic situation and claims that he and their son Marco are at risk with the result of throwing Giulia out of the house. Giulia is desperate, but the worst is yet to come.
Barbara, a scheming young journalist full of ambition will overhear a phone call between Giulia and her doctor. She finally has the infallible weapon with which to destroy her rival’s career. The next day, all the newspapers are carrying the same story: Giulia Visconti is HIV positive.
Giulia is now truly alone in a world which treats her with hostility and discrimination. As a result of increasing pressure, Giulia has a miscarriage and ends up in the hospital. She submits to many tests, including a re testing for AIDS. It will be then that she discovers that she had been previously misdiagnosed: the result is negative, she is save and healthy.
Courted once again by both the TV network and her husband, Giulia fulfils the first liberating act of her life.
During a live news broadcast, she makes an emotional appeal to the viewing public, unmasking the ignorance, cruelty and social hypocrisy with which she was confronted during the ordeal of her “illness “.