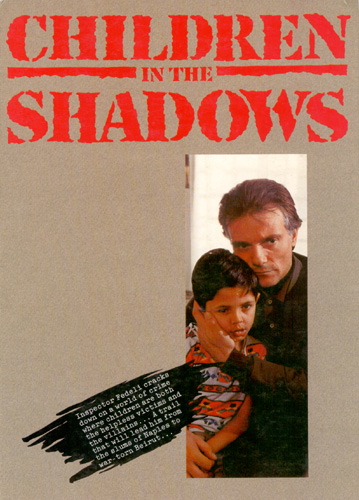 Children in the Shadows

When Inspector Massimo Fedeli hears the sound of a woman singing in the streets of Naples, he yet doesn’t realize that it is a tune that will take him into a juvenile world of organized crime.
Angela is the mysterious and beautiful woman who sings the song and when Massimo meets her he falls hopelessly in love. Then he discovers that she is head of an international crime ring which deals mainly in drugs. And her 16 year old son, Salvatore, is the emerging leader of a baby – clan of children trained to kill and push drugs. He is also linked to a merciless market where children are bought and sold for anything. Massimo must trap Salvatore into leading him to powerful names behind this child traffic.
Despite continued attempts on his life, Massimo is determined to hunt down the organization.
After searching and travelling, his investigations lead him to a closer organization apparently dealing in child adoption.
With Abed, one of the victims of child trade, the Inspector sets out to destroy the men and the power which has silenced so many lives.