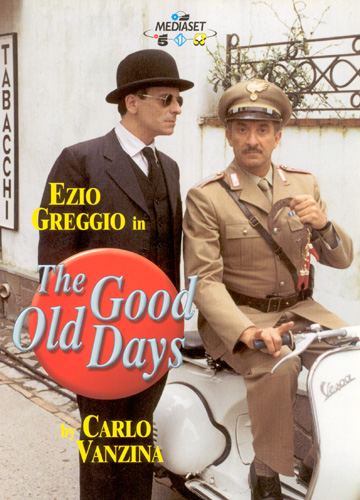 The Fifties. A ferry is mooring in the port of Capri, on board is Arturo Colombo, a carabinieri sergeant who has just been posted to Capri from the north of Italy. He is welcomed by Gavino Puddu, a very pleasant but definitely not very bright Sardinian. Mario Proietti, a greengrocer from Rome, and his daughter Marisa also land in Capri. They have won a month at the Grand Hotel Quisisana in a TV contest. In the square, among the other vendors, there is a small stall where the beautiful Carmela and her parents Vincenzo and Maria sell pizzas. Carmela is in love with Ciro, the island boatman, but these lovers are even more star-crossed than Romeo and Juliet. Every time Ciro attempts to approach Carmela, her brothers Tonino and Salvatore, threaten him and send him packing. But Don Peppino, the village priest, helps the young couple and becomes their go-between.
Meanwhile the money lender Don Raffaele puts Carmela’s family in a tight spot, and since they are up to their eyes in debt, they want Carmela to marry Cocuzza, a rich young hotelier in Capri.
Colombo arrives at his new accommodation and meets Addolorata, the spinster housekeeper who rules with an iron rod. Marisa, pretending to be a princess, is invited to lunch with her father at the young Duke Dudù Borbone’s villa. Proietti and Marisa have tried to pass themselves off as members of the Torlonia family, but they are exposed by Princess Colonna who recognise Proietti as her greengrocer and the two of them are thrown out of the villa. Appetito, the owner of the funeral parlour, is persuaded by the sergeant, who has experienced his evil influence in person, to leave the island and go north “ among people who are more progressive and unprejudiced”. But soon after leaving port the ferry with Appetito on board bursts into flames…