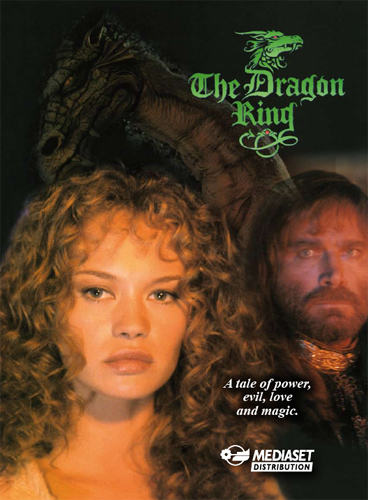 Once upon a time there was a feared and cruel King of all Kings. The symbol of his power was a dragon ring which he wore on his hand and to which everybody had to swear obedience. The King had a young daughter called Desideria. Once, when the King of all Kings was returning from one of his voyages, he came across a new born baby girl who was being fed by some wolves. He called her Selvaggia and he took her with him back to the castle, causing Desideria to be very jealous.
Years pass by, and Desideria falls in love with Victor, the leader of a band of rebels who has been imprisoned. His father had been killed by the King some time before. Desideria manages to free him but the King finds out and as a result, Desideria decides to flee. With the help of Lake Fairy who gives her a magic doll, Desideria finds her loved one, Victor who takes her to the rebel camp.
In the meantime, Selvaggia tries to take possession of the Dragon ring in order to transform the population of wolves into human beings. She puts Victor under a spell which makes him fall in love with her and he runs back to the castle to marry her.
It is only minutes before the wedding that Desideria finally succeeds in convincing everybody of her step-sisters wicked curse. Selvaggia is furious and out of revenge she turns everybody present into blocks of ice. Everybody, that is, except for Desideria and Victor who chase Selvaggia who has been turned into a dragon for all her badness. Once again the Lake fairy comes to the rescue with the fairy sword which the couple use to kill the dragon and bring the king and his court back to life again.
Desideria and Victor are now free to marry. They throw away the dragon ring, a symbol of evil and live happily ever after.