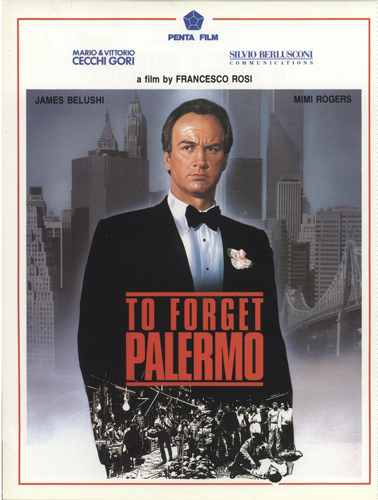 From an interview with director Francesco Rosi.
"The main character is Carmine Bonavia, an Italo-American, son of a Sicilian farmer who emigrated to the United States many years before.
He was born in America and feels American.
He is a young successful politician, candidate in the mayoral elections in New York City. He campaigns for the legali¬zation of drugs.
The film narrates his honeymoon in Palermo with his wife, a journalist. He finds a city that seems eaten up by leprosy. The remains of the ancient nobility, the wonders of Palermo and the city's historical center have all completely degenerated.
TO FORGET PALERMO also talks about Mafia, which in 1989, means talking about drugs. When you talk about drugs, you have to face the actual and dramatic question: how can organized crime and drugs be separated from each
other so that a common drug addict won't be considered a criminal?
When Carmine Bonavia goes through this "hell", he is forced to face his roots, his original culture. He is forced to deal with things he did not know existed.
The picture ends up in New York again and at the point one can see the changes that Carmine Bonavia has gone through. His personality and his conscience have been af¬fected by the experiences he went through in Sicily.
Jim Belushi, a good, young and ambitious actor is Carmine Bonavia; Mimi Rogers plays the wife. My daughter Caroli¬na plays the part of an Italian TV journalist in New York. The title of the picture can be imagined with a question mark at the end: To Forget Palermo? Impossible! The title does not say that Palermo must be forgotten. It says: We have forgotten Palermo. It also says: Palermo must not be forgotten".