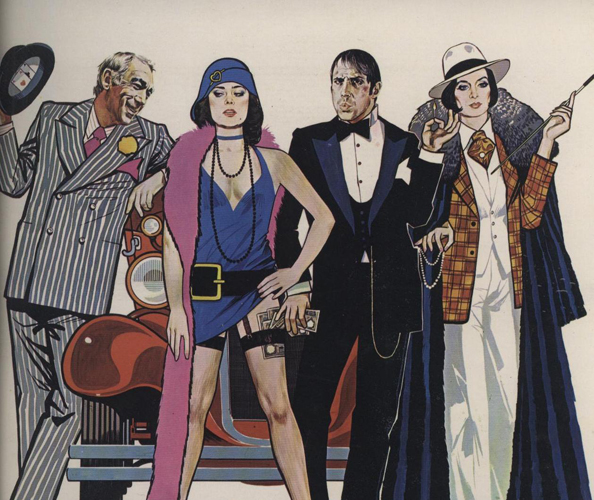 1930: Mistinguette triumphs at the "Casino de Paris" and the Charleston conquers Europe. Bang, a famous swindler, is being taken by train to prison. With one of his ingenious schemes, he manages to remain alone in the carriage toilette, which is already prepared for his escape, but he finds there a young man, Felix, who goes off with a friendly greeting.
From this moment Felix's misadventures begin. He is mistaken for Bang by the people who were expecting his escape and is beaten up. After escaping again, he is caught once more by means of the provocative graces of Charlotte, a lovely girl, and is forced to choose; to die or to earn 40,000 francs. He is responsible for the failure of Bang's escape and now it is up to him to get him out of jail. The enterprise succeeds, but just when Bang is about to meet his "friends", Felix finds himself, to his consterna¬tion, without the money but above all without Bang, who has mysteriously vanished.
After a series of thrilling adventures Felix and bang meet again.. and explanations are given: the so-called "friends" are the "gorillas" of Belle Duke's band. Belle is the rich owner of a gambling den float, smarting to revenge herself on Bang, who had swindled her.
The two tricksters decide to enter into partner¬ship, a strange partnership in which each tries to out do the other and also.. each other! The whole thing is interspersed with fleeting and "mysterious" appearances of fascinating Charlotte, who has bowled Felix over complete¬ly. Finally the two architect a brilliant plan to "sting" Belle Duke and her "gorillas". It is the most complex and sensational swindle ever conceived, and it seems on the point of ending up tragically, with shots and motorboats that explode in mid air; but no blood flows, only diamonds and millions.
The three (there is also Charlotte) are together again, laden with money, great friends and hap¬py but... there is a sympathetically alarming complication.